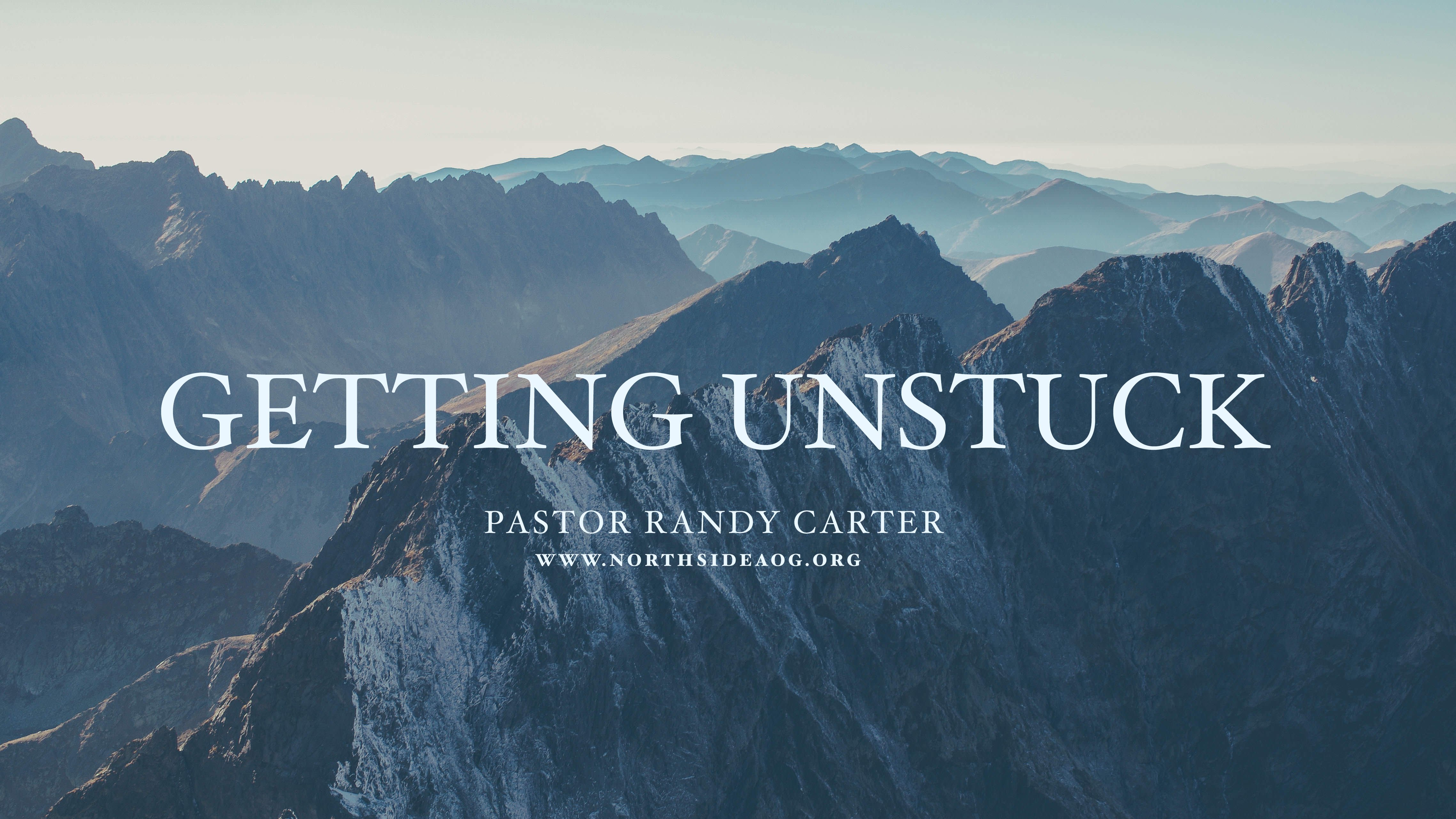 I was walking home from first grade one day when I decided to take a short cut through an open field. It had been raining for several days, and, much to my displeasure, I got stuck in the mud. No matter how hard I tried, I couldn’t seem to free my right foot. Finally in desperation, I was able to pull my right foot out of the boot, however the boot remained stuck. When I got home and told Mom what had happened, I found myself stuck in a home with a very unhappy Mom.

All of us have been stuck: paralyzed and unable to move forward with our lives and our ministries. A few years ago, I found myself stuck in a place of frustration and discouragement. The Lord used a familiar passage to help me “get unstuck.” It’s a story all of us are familiar with – the story of the Children of Israel being stuck in the wilderness.

Deuteronomy 1:6 (NIV) “The LORD our God said to us at Horeb, “You have stayed long enough at this mountain.”

As I poured over this story, I found several reason why they were stuck at that same mountain. I also found that I was stuck for many of the same reasons.

The first thing the Lord asked them to do was, “Break camp and advance into the hill country…” Deut. 1:7a. He was asking them to interrupt what had become their normal routine and do something different.

The late A.W. Tozer said, “The treacherous enemy facing the church today is the dictatorship of the routine, when routine becomes “lord” in the life of the church. Programs are organized and the prevailing conditions are accepted as normal. Then we have reached the place where what has been determines what is, and what is determines what will be.”
There is nothing wrong with routine until our routine becomes a series of meaningless rituals. When was the last time you allowed the Lord to interrupt your routine?

Sadly the Children of Israel refused to move. Deut. 1:26 “But you were unwilling to go up; you rebelled against the command of the Lord your God.”

Pastor Doug Fields asks, “Are you living life as a Lazy Boy or Risky Boy? Most Americans shun risk and seek comfort. This is evidenced by the fact that the number one selling chair in America is Lazy Boy. Notice, it’s not ‘Risky Boy’. We worship comfort and security. We’ve even developed a language of comfort. We say, “I want to go home and VEG OUT.” For some, their whole ambition is to live their lives like a vegetable. We become couch potatoes sitting at home watching TV while we sit in our LAZY BOYS. Even the churches have PEW POTATOES!
How sad that must be to God. Oh, we justify our lack of risk by hiding behind our excuses. “I’m not capable, I’m not rich enough, I’m not intelligent enough.” We hide behind our deficiencies while God is looking and waiting for someone who would say, ‘Hey, I might be small potatoes, but this spud is for you Lord.’ If you’ll dare to give God what you have, He will shock you with what He will accomplish through your life.
We fall into the trap of grumbling.

Deut. 1:27 “You grumbled in your tents and said, ‘The Lord hates us; so he brought us out of Egypt to deliver us into the hands of the Amorites to destroy us.'”

Grumbling is the fruit of an ungrateful heart. No believer has ever grown in their relationship with the Lord because of grumbling!

Deut. 1:28 “Where can we go? Our brothers have made us lose heart. They say, ‘The people are stronger and taller than we are; the cities are large, with walls up to the sky. We even saw the Anakites there.'”

John Maxwell says, “A leader’s potential is determined by those closest to him or her.” Who are the influencers in your life? Are you surrounded by “yes we can” people or by “no we can’t” people.

This is the natural outcome of the previous three. The Lord reminds them of His faithfulness to fight for them, but they choose not to remember. Deuteronomy 1:32-33 (TLB) “But nothing I said did any good. They refused to believe the Lord our God 33 who had led them all the way, and had selected the best places for them to camp, and had guided them by a pillar of fire at night and a pillar of cloud during the day.”

How Do We Move Forward In God?

Deut. 1:8 “See, I have given you this land. Go in and take possession of the land that the Lord swore he would give to your fathers–to Abraham, Isaac and Jacob–and to their descendants after them.”

God has a promise for whatever fear might be keeping you stuck and afraid. He reminds them of what He had already promised their parents – that He would give this promised land to them and to their descendants after them. He also promised that He would go with them and that He would fight their battles for them. Faith and growth don’t come by following the safe or the easiest way – they come by trusting and obeying God. What are you afraid of? Grab hold of a promise from God and get moving.
Reflect on God’s faithfulness.

Deut. 1:29-31 “Then I said to you, ‘Do not be terrified; do not be afraid of them. The Lord your God, who is going before you, will fight for you, as he did for you in Egypt, before your very eyes, and in the desert. There you saw how the Lord your God carried you, as a father carries his son, all the way you went until you reached this place.'”

How many times and in how many different ways has the Lord shown Himself strong in your life? How many times have you stepped out in faith and found that you were not alone? When we step out – God always steps up. We can base our faith for tomorrow on God’s faithfulness in the past.
Monitor your words.

Deut. 1:34 “When the Lord heard what you said, he was angry and solemnly swore: not a man of this evil generation shall see the good land I swore to give your forefathers. Numbers 14:28 (NIV) So tell them, ‘As surely as I live, declares the LORD, I will do to you the very things I heard you say…'”

I wonder how many times I have short-circuited the blessings of God in my life with my negative words of doubt and disbelief? I’m learning to speak my dreams, not my fears.

Deut. 1:36 “…except Caleb son of Jephunneh. He will see it, and I will give him and his descendants the land he set his feet on, because he followed the Lord wholeheartedly.”

I have found that life and ministry has a way of draining passion right out of our lives. It’s easy to fall into the trap of going through the motions without a sincere, heartfelt passion. But our calling demands our all. There are times when we have to humble ourselves and allow the Lord to reignite the flame of passion for Him and His work within us.

By the way Mom and I went back to that field to look for my boot, but the field had sucked it up. We never found it. But I did find my passion again! And as I near age 64, I am more excited about serving the Lord than I have ever been. My dreams for the future are far greater than my memories of the past.

Latest Articles
Trailer
Global International Church Network (GICN) is a relational connection for a global network of international churches. Our intentional desire is to establish visibility, encourage vision and enhance the vitality of our churches.
Copyright - All Rights Reserved
Back To Top